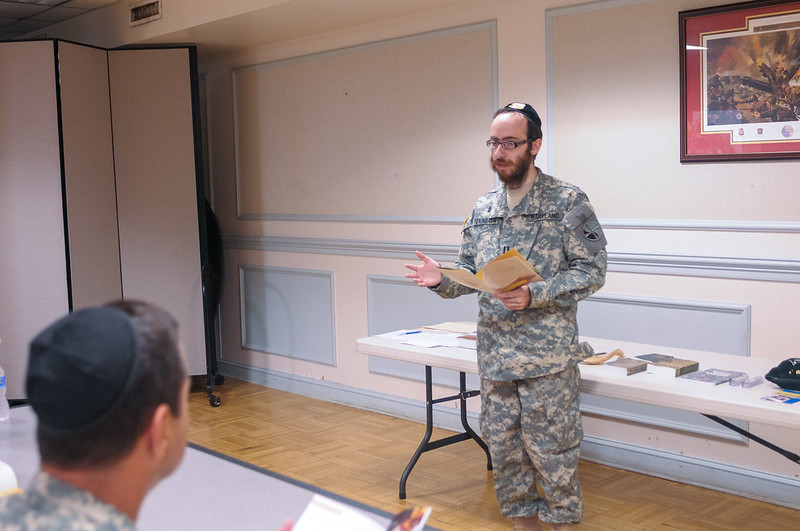 Translated from Hebrew as “Head of the Year,” Rosh Hashanah celebrates the anniversary of mankind’s creation.

“I became a chaplain in 2007 and met many Soldiers and Jewish Soldiers that were part of the National Guard and state guard (Defense Force,)” said Tenenbaum who is also an associate rabbi at the Chabad of Park Heights in Baltimore. “There is definitely a need for Jewish services in the state guard and National Guard.”

Tenenbaum blew the shofar, a ram’s horn, which is blown 100 times and shared honey cake. The festive meal includes a fruit, the first night is an apple dipped in honey symbolic of asking for a sweet new year.

Tenenbaum started the Jewish Uniformed Service Association of Maryland, which outreaches to Jewish men and women in law enforcement, fire rescue and military.

“Serving those who serve us,” he mentioned is the organization’s motto.

The New Year begins a series of holidays, the next of which is the holiest day of the year Yom Kippur, the Day of Atonement.  The eve of Yom Kippur is Friday, Sept. 13. It includes an early morning service, festive meals and generous charity. The day of Yom Kippur is a 25-hour fast from sundown to the following nightfall with religious service throughout the day.

“I would like to wish all the Jewish members of the Maryland Guard and the Maryland Defense Force a happy, healthy and sweet new year,” said Tenenbaum.