Employer Support of the Guard and Reserve’s annual Bosslift Flying in on UH-60 Blackhawk Helicopters, employers of Maryland Guard Soldiers took part in the Maryland Committee for Employer Support of the Guard and Reserve’s annual Bosslift Aug. 8, 2009. The Blackhawks transported them from Warfield Air National Guard Base at Martin State Airport to the Lauderick Creek Training Site at the Edgewood Area of Aberdeen Proving Ground to watch the 1297th Combat Sustainment Support Battalion conduct train operations. 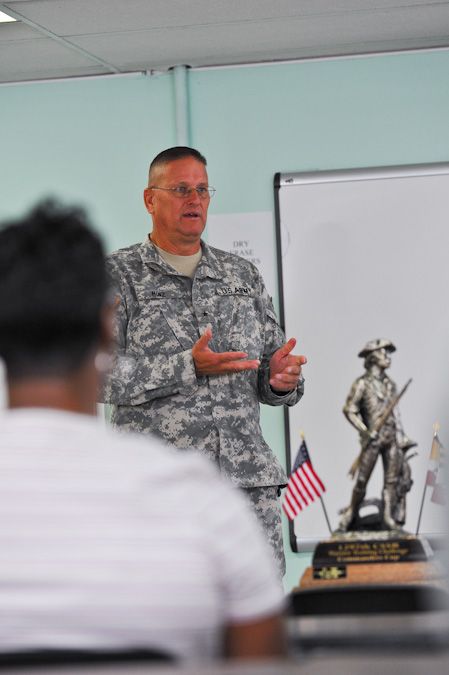 Employers received briefings about the ESRG program and how the Guard values the relationship and understanding that civilian employers have for their employees with military obligations. Rita Carter, a contracting supervisor for the U.S. Property and Fiscal Office for Maryland, receives her first Meal Ready-To-Eat – Southwestern Chicken. “I was told that chicken was the best,” she said. The ESGR was established in 1972 to promote cooperation and understanding between Reserve component members and their civilian employers. It also serves to assist in the resolution of conflicts arising from an employee’s military commitment. Bosslift’s provide employers the opportunity to share their insights on the challenges and benefits of having employees that serve in the Reserve components. Employers are encouraged to offer recommendations and ideas for improving the employer/employee relationship with respect to the consequences of military service. Soldiers and employers participated in an after action review discussing the good and bad points of exercise as well as what can use improvement. The employers viewed and learned about several weapons systems used in the Maryland Guard like the MK19-3 Grenade Machine Gun, the M249 Squad Automatic Weapon and the M2 .50-Caliber Machine Gun. “As much as I want them [her Guard employees] to learn how to do their jobs it’s important for me to learn what they do on the military side,” said Carter. “It helps me to better understand and be as flexible as I can be so that they can perform the military duty that they need to do.” “The Bosslift gave me the opportunity to see what goes on out in the field and makes me appreciate the work that they [Servicemembers] do for me,” she added.