“This is the first time the robots have been brought in. This is something that we’re going to sustain on a regular basis,” said Capt. Alexi Franklin, commander of the 253rd Engineers.

Although Soldiers operate it using a gaming system controller, the 510 Packbot FasTac is not a game.

“The controls are natural because the interface is a gaming controller,” said Pvt. Brett Beauregard, a native of Waldorf, Md., a full-time college student and a recently certified 510 Packbot operator. “Younger generations are more comfortable with video games. This gives them a simple interface that they’re used to.”

The 510 Packbot Unmanned Ground Vehicle with the Fast Tactical Maneuvering kit allows Soldiers to approach dangerous objects from a safe distance. Its cameras can look through windows and around doors to investigate and neutralize potential threats.

“The three main missions of combat engineers are mobility, countermobility and survivability. This is mobility training,” added Franklin. “The robots can help identify hazards and get them out of the way.”

The more than 50-pound robot moves at a top speed of 5.8 mph and can lift 5 pounds with the arm fully extended horizontally.

“My first time going up and down stairs [with the Packbot], I was quite nervous. It’s an expensive piece of equipment. If you lose the center of gravity, it’s possible it could flip over,” said Beauregard. “In a combat situation, you only have one chance at it.”

The 253rd will not receive a robot of its own but will continue to use the MTT from Fort Leonard Wood, Mo., to conduct future training on the robot.

The two-day basic operators course consisted of classroom instructions and basic familiarity on the first day. The second day was more hands on. The Soldiers learned to climb stairs and navigate obstacles. After the hands-on they faced the certification.

“I’m there to ensure that it functions properly that it can get the job done and that it’s capable of picking up objects and moving them,” added Beauregard.

The first of the two-part certification course included preventive maintenance checks and services, Packbot set up and a functions check. The second part included maneuvering the 510 Packbot over a predefined, obstacle-laden 100-meter course, performing basic tasks like picking up and placing objects, driving and manipulating the camera. 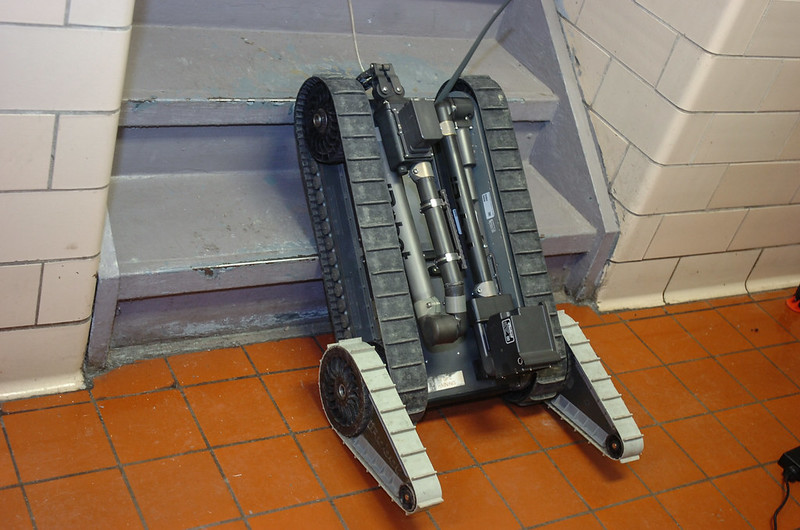